This test was designed to assess the measurement accuracy of SOLO under controlled conditions.

Shots were fired at a distance of 100m onto a portable wooden target frame equipped with two sets of SOLO electronic target sensors, with a 300m ISSF target face overlaid with 1mm grid paper.

The location of the bullet holes in the paper were compared to the electronically-reported values.

A standard 300m ISSF rifle target was installed on the target frame.  A single rectangular sheet of white cardboard was placed over the conventional target face, and six sheets of millimetre grid paper were attached.

This allowed each bullet to be independently measured three times - by the paper, by electronics unit #135, and by unit #138

25 shots were fired into the red grid paper in a regular rectangular group approx 12"/300mm wide by 8"/200mm high, in the central area of the target.  Five shots were then fired into each of the four corner areas having green grid paper, producing a 45-shot test group 27"/685mm wide by 17"/435mm high and occupying a majority of the target face area.

The 45 electronically-reported shot values of SOLO #135 and SOLO #138 were recorded into a spreadsheet.  These values were reported to the nearest whole millimetre.

The central 25 shots positions on the paper were measured to the nearest 0.5mm, recorded into a spreadsheet, and compared to the shot positions reported by SOLO unit #135. The Standard Deviation of the errors in the x-axis ("SDx")was 0.84mm and in the y-axis (SDy) was 0.92mm.  Combining these in a square-root-of-sum-of-squares manners gives a Total Error of 1.26mm SD(total).

The humidity at the rifle range used was very high, creating handling difficulties for the cardboard and paper used for the target face and grid paper; this effect can be seen as buckling and other distortions of the paper is evident in the photographs of the millimetre grid paper.  This gave rise to an error source in the paper target coordinates on the order of 1mm.

To eliminate the measurement errors of the distorted paper, the electronically reported results between the two e-target units #135 and #138 were compared.  For the 25 shot central group SDx was 0.50mm and SDy was 0.44mm, for an SD (total) of 0.66mm.  This error source is a sum of the measurement errors of the two SOLO units used to generate these coordinates.  If we consider their errors to be uncorrelated we can estimate the measurement error of a single SOLO unit by dividing these figures by the square root of two, suggesting that a single SOLO unit  had an SD(total) of 0.47mm for these central 25 shots.

A similar analysis of the two electronically measured coordinates was done for the entire 45 shot group, yielding a total SD of 1.09mm for both SOLOs combined, and suggesting that each single SOLO had a total SD of 0.77mm for the 45 shots occupying the majority of the target face area.

Future high-resolution tests of bullet holes versus electronically reported positions will need to use dimensionally stable materials, such as plastic drafting film. 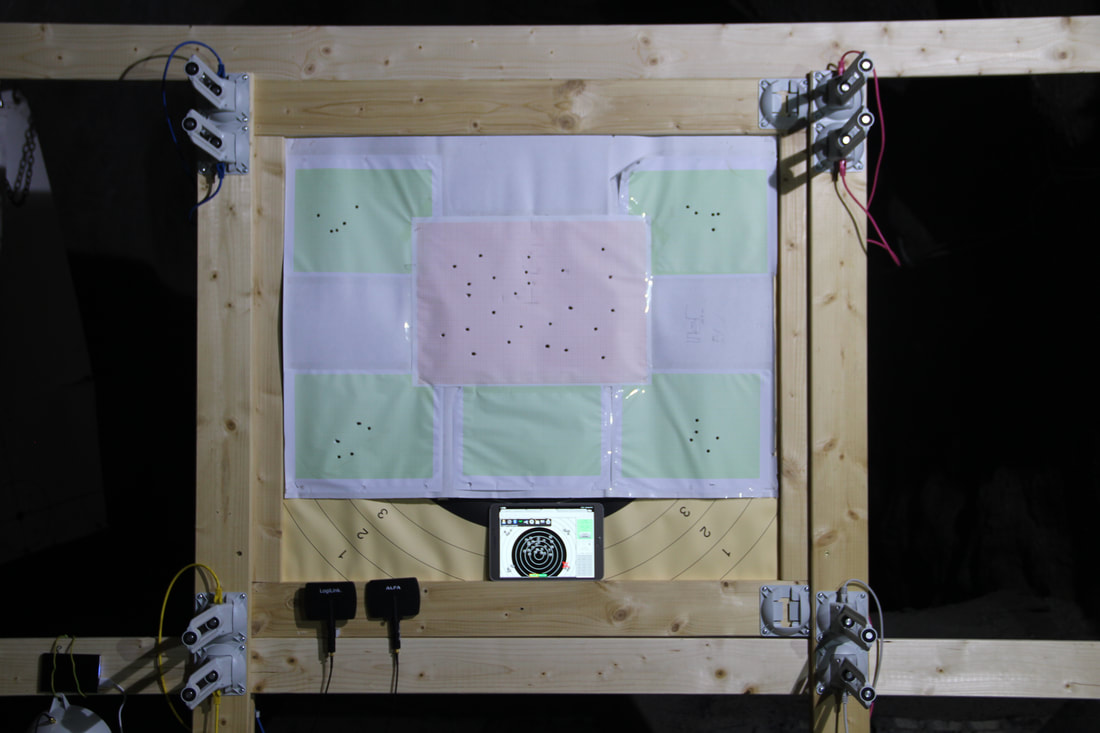